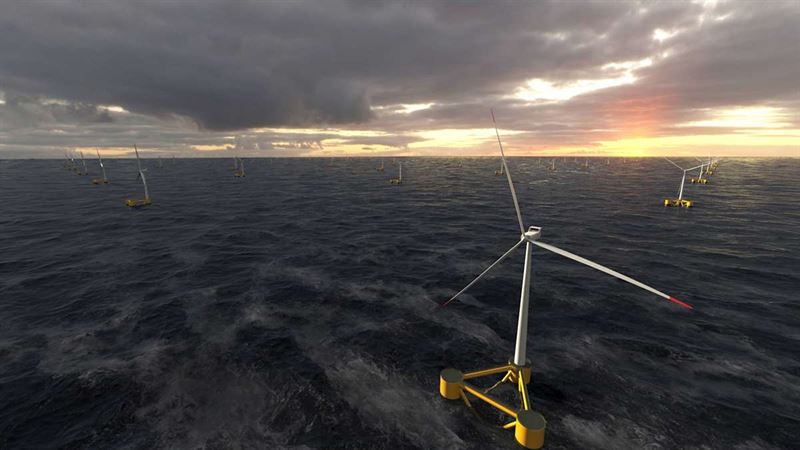 A manifesto has been unveiled to deliver a green industrial revolution in Scotland with more than 5,000 new jobs, a major fabrication yard, and the equivalent of up to £15 billion investment in floating offshore wind.

As partners, Ocean Winds and Aker Offshore Wind have launched a ten-point plan to create a skilled workforce and manufacturing opportunities through the supply chain for generations to come.

At the heart of the plan is the establishment of a major manufacturing plant in Scotland for the fabrication and assembly of giant steel floating structures, which would then be installed in the deep waters of the North Sea.

It would be the largest industrial innovation in Scotland since the dawn of the oil and gas sector, positioning Scotland as a global leader in clean energy.

Aker Offshore Wind and Ocean Winds are the majority owners of Principle Power Inc (PPI), which has developed the steel-based floating platforms called ‘WindFloat’ - the world’s most proven floater technology - to harness this energy.

The WindFloat technology is currently deployed in two operational projects, with a total capacity of 75MW, and which utilise the largest wind turbines seen to date on floating platforms.

The proven design means the consortium is uniquely ready to deploy commercial-scale windfarms off Scotland’s coasts, driving down the cost of energy and unlocking the resources of deeper waters.

The two partners are working with the National Manufacturing Institute of Scotland and the University of Strathclyde to develop a 3D immersive visualisation of the fabrication yard where the Windfloat platforms and turbines would be built, which would become an industrial powerhouse of international significance.

The design is set to be promoted across the world early enough to identify manufacturers and select the final location in Scotland for the yard, and fabricators interested in setting up in Scotland are also being invited into early discussions.

This is well ahead of the offshore wind project phase and will ensure that Scotland’s fabricators would then be ready for the implementation of the ‘Scotwind’ leasing programme.

The joint ScotWind bids from Ocean Winds and Aker Offshore Wind could generate investment of the equivalent of up to £15 billion if the partnership is awarded up to three sites generating 6GW of wind energy in total.

Through direct work and supply chain opportunities, each proposal is estimated to generate more than 5,000 jobs and 200 apprenticeships in Scotland across all project stages, helping to deliver Scotland’s ‘just transition’ from fossil fuels, as well as mobilising the oil and gas and engineering supply chain by providing major new opportunities.

There would also be extensive investment in Scotland’s existing ports and harbours, as well as innovative new subsea technology, to deliver the companies’ ambitions for up to 6GW of energy production through floating offshore wind in the Outer Moray Firth.

More than 30 Memorandums of Understanding (MoUs) are now in place across the supply chain in support of the bids and the early action needed.

There is a commitment to 60 percent local supply chain content from the UK, of which 40 percent minimum content will come from Scotland, with early enabling investment of tens of millions of pounds in building supply chain capability within the first four years of winning a site.

The new manifesto on how to deliver Scotland’s green industrial revolution, forms the basis of the Ocean Winds and Aker Offshore Wind bids through the ScotWind leasing programme.

The combined 6GW bids across several sites would be by far the UK’s biggest wind energy development and power millions of homes with renewable energy.

Around 80 percent of the world’s wind resources are in waters deeper than 60 metres and are unsuitable for fixed foundations.

“With Scotland’s long history in hydro, experience in onshore wind, and advances in marine renewables, our next frontier is the development of floating offshore wind, moving out to deeper waters and stronger, more consistent winds.

“It is time for innovation in the North Sea to lead the world once again - this time to a net zero future. In our new manifesto, we have set out our vision on the conditions to make the green industrial revolution a reality, and have outlined how our expertise, leadership and investment commitment can achieve this in Scotland.”

“A decade ago, we had a vision for the Moray Firth – the competitive, large-scale deployment of offshore wind generation at 50m water depths, by commercialising the jacket technology used in the two-turbine Beatrice Demonstrator project,” said Dan Finch, Managing Director of Ocean Winds UK.

“We have successfully delivered that vision in Moray East – cutting the cost of offshore wind generation by more than 50 per cent. Now we have a new goal. We want to take our turbines out into the deep waters of the North Sea, commercialising the WindFloat technology proven in demonstrator projects.

“We will create the opportunity for Scotland to lead in that next step of the renewables revolution – the fabrication and assembly of steel floating foundations and the manifesto we have published today explains how, with early supply chain investment and intervention, we will turn that opportunity into a new Scottish industry with global potential.”

ScotWind is the process currently being undertaken by Crown Estate Scotland, at the direction of the Scottish Government, to grant property rights for the seabed in Scottish waters for new commercial scale offshore wind projects.

Edinburgh-based Ocean Winds UK is the developer behind Scotland’s largest windfarm, the 950MW Moray East windfarm, taking it from concept in 2009 to a power-producing reality in 2021, and globally it is the world’s fourth largest wind energy company.

The Aker group of companies have had an extensive presence in Scotland since the 1980s and have been a driver of maritime and industrial development - building ships and designing, constructing and servicing offshore installations from Glasgow to Aberdeen, on Scottish isles, in ports and in the ocean.

In 2020, Aker established Aker Offshore Wind so its maritime and offshore experience and expertise could be fully applied to the transition to low-carbon energy.

“Floating Offshore Wind: delivering a Green Industrial Revolution for Scotland - a manifesto” can be accessed as an attachment.

The jobs and investment figures in this press release relate to aggregate figures of a scenario of 6GW awarded capacity.

OW is a 50-50 offshore wind joint venture, owned and created by EDP Renewables and ENGIE. Both companies believe that offshore wind energy has become an essential part of the global energy transition, leading to rapid growth in the sector and increased competitiveness. That is why they have grouped all their existing and pipeline offshore portfolio into the new company to play a leading role in the offshore market.

OW, headquartered in Madrid, is currently present in 8 countries, primarily targets markets in Europe, the United States and selected parts of Asia, from where most of the growth is expected to come.

ScotWind Leasing is the process currently being undertaken by Crown Estate Scotland, at the direction of the Scottish Government, to grant property rights for the seabed in Scottish waters for new commercial scale offshore wind projects. It is the first round of seabed leasing for offshore windfarms in Scotland for a decade.

EDP, one of the OW sponsor companies, has recently reaffirmed its role in the UK’s energy transition with plans to invest up to £13bn by 2030. The announcement made direct reference to the ScotWind process. For the avoidance of doubt, announcement related to portfolio investments by EDP were estimated on a different capacity scenario over a different time horizon, including onshore wind, solar, and offshore wind assets.