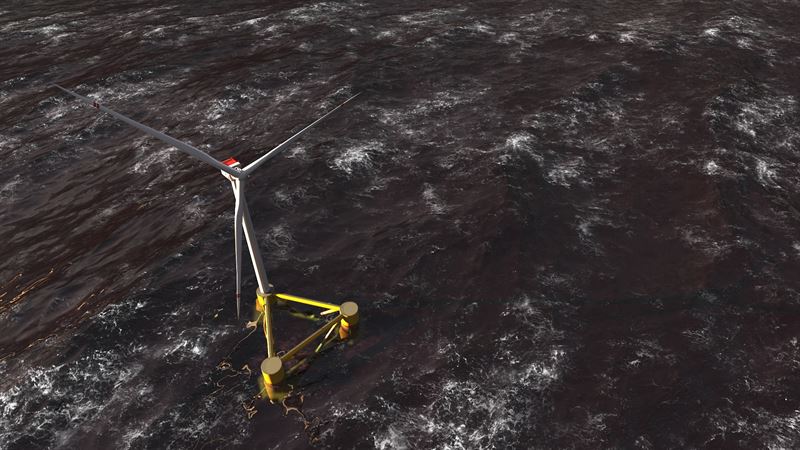 Aker Offshore Wind, Ocean Winds, and Statkraft have signed a collaboration agreement to bid for, develop, construct, and operate offshore wind and associated infrastructure for the Utsira Nord license area in Norway.

The equal partnership will submit an application to the Norwegian authorities for the development of a commercial scale floating offshore wind farm in the Utsira Nord license area in the Norwegian North Sea.

Combining five decades of North Sea expertise in offshore development, execution, and marine operations from the Aker group of companies, the experience of Ocean Winds in developing, building, and operating bottom-fixed and floating offshore winds farms globally, and Statkraft´s deep expertise in renewable energy development, operations and management, the consortium covers the full value chain from development to delivery of offshore green energy to market. Aker Offshore Wind and Ocean Winds have partnered on other projects in California, USA, South Korea and most recently in Scotland. Statkraft and Aker Offshore Wind have a well-established partnership for the Sørlige Nordsjø II area in Norway.

Kristian Røkke, Chairman of Aker Offshore Wind and CEO of Aker Horizons, said: “Together with Ocean Winds and Statkraft, we have formed a partnership of experienced developers and operators to push the boundaries for offshore floating wind and develop new value chains for Norwegian industry. Aker Offshore Wind brings the capabilities and experience from five decades in the offshore industry to scale and industrialize floating wind in a sustainable way. At Utsira Nord, the ambition is to further develop and industrialize technology based on Principle Power’s market-leading floating substructure technology.”

Christian Rynning-Tønnesen, Chief Executive Officer of Statkraft, said: “As Europe’s largest producer of renewable energy, Statkraft’s competence in wind farm development and operations, and expertise in energy management provide a good foundation for success. By entering today’s cooperation, we are expanding our offshore wind exploration in Norway to floating technologies. As a result of promising developments, cost reductions, increasing electrification, rising demand for renewable energy and favorable regulatory frameworks, Statkraft views this market opportunity as a long-term value creative addition to our portfolio.”

Spyridon Martinis, Chief Executive Officer of Ocean Winds, said: “Our aim is to deploy all the know-how, experience and technology of Ocean Winds, especially the one acquired at Windfloat Atlantic, the world's first semi-submersible floating wind farm in operation since last year, to contribute the best to the new Utsira Nord project. Our strong portfolio includes projects in operation such as Windfloat Atlantic (Portugal) and Seamade (Belgium), as well as Moray East (becoming Scotland’s largest offshore windfarm), which has recently produced its first power before the end of the construction phase. We have a track record of using our strength as global leaders in the emerging offshore wind sector to create opportunities in the local communities in which we have a presence, and we hope to generate a positive impact on the Norwegian industry.”

Utsira Nord, an area off the coast of Haugesund in western Norway, is known for having consistently strong winds. Offshore wind is a rapidly maturing renewable energy technology that is poised to play an important role in future energy system and the partners are ready to pursue the possibilities in the Utsira Nord license area.

This information is considered to be inside information pursuant to the EU Market Abuse Regulation and is subject to the disclosure requirements pursuant to Section 5-12 the Norwegian Securities Trading Act.

Aker Horizons will work closely with the consortium on topics including strategy and financing, and the partnership will also benefit from the broad capabilities of other Aker companies, including Cognite and Aker Solutions.

Statkraft is a leading company in hydropower internationally and Europe’s largest generator of renewable energy. The Group produces hydropower, wind power, solar power, and supplies district heating. Statkraft has developed hydro power in Norway since early in the 20th century and is still developing major hydro power projects internationally. Today the company is also a large developer of wind- and solar power in Europe and globally.

Statkraft is a leading player in market operations, in the Nordic power market as well as in several European countries. The company is among the top players in Europe in providing secure and stable income for renewable generators through offering Power Purchase Agreements, including for offshore wind assets. The market operations also include a prominent position in Europe in optimising and controlling the dispatch of renewable generation assets, including a large and increasing fleet of third party owned assets.

Statkraft’s expertise in energy management and its experience and competence in wind farm development and operations both onshore and offshore provide a foundation for success in developing Utsira Nord.

OW is a 50-50 offshore wind joint venture, owned and created by EDP Renewables and ENGIE. Both companies believe that offshore wind energy has become an essential part of the global energy transition, leading to rapid growth in the sector and increased competitiveness. That is why they have included all their existing and pipeline offshore portfolio in the new company.

OW has a strategic advantage and is well-positioned to play a leading role in the offshore market. EDPR and ENGIE are combining their offshore wind assets and project pipeline in OW, starting with a total of 1.5 GW under construction and 4 GW under development, with the target of reaching 5 to 7 GW of projects in operation or under construction and 5 to 10 GW in the advanced development stages by 2025. OW primarily targets markets in Europe, the United States and selected geographies in Asia, from where most of the growth is expected to come.